Bupropion is a unique antidepressant with FDA-approved indications for major depressive disorder1-32, seasonal affective disorder1,2, smoking cessation4, and as an adjunct to diet and exercise for chronic weight management in adult patients with BMI >=30 kg/m2 when co-formulated with naltrexone.5 Unlike tricyclic antidepressants, bupropion is a monocyclic aminoketone and in a pharmaceutical class by itself. Although often lumped with serotonergic SSRI antidepressants, it has limited serotonergic properties. The most significant side effect of bupropion is its risk of seizures.

Bupropion has been associated with seizures even at therapeutic doses and was removed from the market shortly after it was initially approved in 1986.6 Data showed that seizure risk was dose-dependent and highest in patients with eating disorders, previous head trauma, or epilepsy. Bupropion was reintroduced to the market 3 years later with label adjustments that included a lower maximum daily dose and contraindications for use in epilepsy, eating disorders, or head trauma. While these measures improved the safety at therapeutic doses, seizures continue to be a serious effect in overdoses.

Bupropion inhibits the reuptake of norepinephrine and dopamine, and unlike many other antidepressants, it has little effect on serotonin reuptake.8 Bupropion shares structural similarities to stimulant drugs, including cathinone and amphetamine derivatives.

Bupropion is available orally as a hydrochloride or hydrobromide salt, in combination with naltrexone, and in immediate and modified release formulations (Table 1).

Bupropion concentrations peak in less than 2 hours for immediate release preparations, but take as long as 5 hours with the modified-release formulations.1-5 Its half-life is 21 hours. Bupropion has 3 active metabolites with half-lives ranging from 20-37 hours. The primary metabolite, hydroxybupropion, is formed in the liver through CYP2B6 and has a peak plasma concentration 7 times the peak of the parent drug.1-5,9 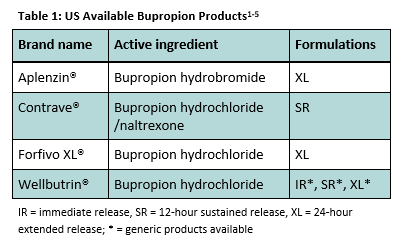 The onset of seizures can vary widely in bupropion overdose and is likely dependent on drug formulation. In exposures reported to Texas poison control centers, onset time to initial seizure ranged from 1 hour to 14 hours post-ingestion (mean, 4.3 ± 3.2 hours).6 Sustained-release preparations accounted for 71% of these exposures.6 Looking at ingestions of the XL formulation only, Starr found that onset time to initial seizure ranged from 0.5 to 24 hours post-ingestion (mean, 7.3 ± 5.4 hours).11 Initial seizure occurred within 8 hours in 68% of patients, between 8 and 24 hours in 24% of patients, and with unknown timing in 8% of patients. Nearly half (49%) of the patients who seized experienced a second seizure with average onset of 9.8 hours (range 1.5-19 hours) post-ingestion.11

Bupropion exposures require extended observations due to the risk of delayed onset seizures.11 Modified-release preparations are commonly preferred for their dosing convenience, and symptom onset does not correlate well with the pharmacokinetics of the parent drug but may be due to its active metabolites. This is especially true for the risk of developing delayed-onset seizures after a relatively asymptomatic period of 8 hours or more in overdose situations. The Utah Poison Control Center recommends monitoring patients at least 8 hours post-ingestion for immediate release bupropion and 24 hours post-ingestion for sustained and extended release bupropion and all self-harm attempts. If patients become symptomatic, observe until symptoms are resolved.

There is no specific antidote for bupropion, and management is supportive. Benzodiazepines are the drug of choice to treat bupropion seizures and should be strongly considered for patients with agitation, tachycardia, hallucinations, or tremor in order to prevent progression to seizures. Barbiturates and propofol may be considered for refractory seizures.17 Since drug-induced seizures are diffuse and have no identifiable seizure focus, phenytoin is less likely to terminate these seizures when compared to other sedative-hypnotic anticonvulsants.17

A baseline ECG and frequent vital sign monitoring should be performed on all patients who ingest bupropion. For all self-harm ingestions, patients should be placed on continuous cardiac monitoring, paying close attention to the QRS and QTc intervals. In the case of severe cardiac toxicity, intravenous lipid emulsion therapy may be considered, and consultation with a medical toxicologist is recommended.18

Bupropion is a unique antidepressant with an increased risk for seizures in supratherapeutic doses. Onset of seizures can be delayed 16-24 hours, necessitating prolonged observation times following ingestion of modified-release formulations. The Utah Poison Control Center is available at 1-800-222-1222 for toxicology consultation, 24 hours a day, 7 days a week, 365 days per year.

17. Shah AS, Eddleston M. Should phenytoin or barbiturates be used as second-line anticonvulsant therapy for toxicological seizures? Clin Toxicol (Phila). 2010; 48(8):800-5.

ABOUT THE UTAH POISON CONTROL CENTER

The UPCC is a 24-hour resource for poison information, clinical toxicology consultation, and poison prevention education. The UPCC is a program of the State of Utah and is administratively housed in the University of Utah, College of Pharmacy. The UPCC is nationally certified as a regional poison control center.